Events Calendar This Weekend in PearlandHalloween Events in PearlandMoviesRestaurantsContests
Events 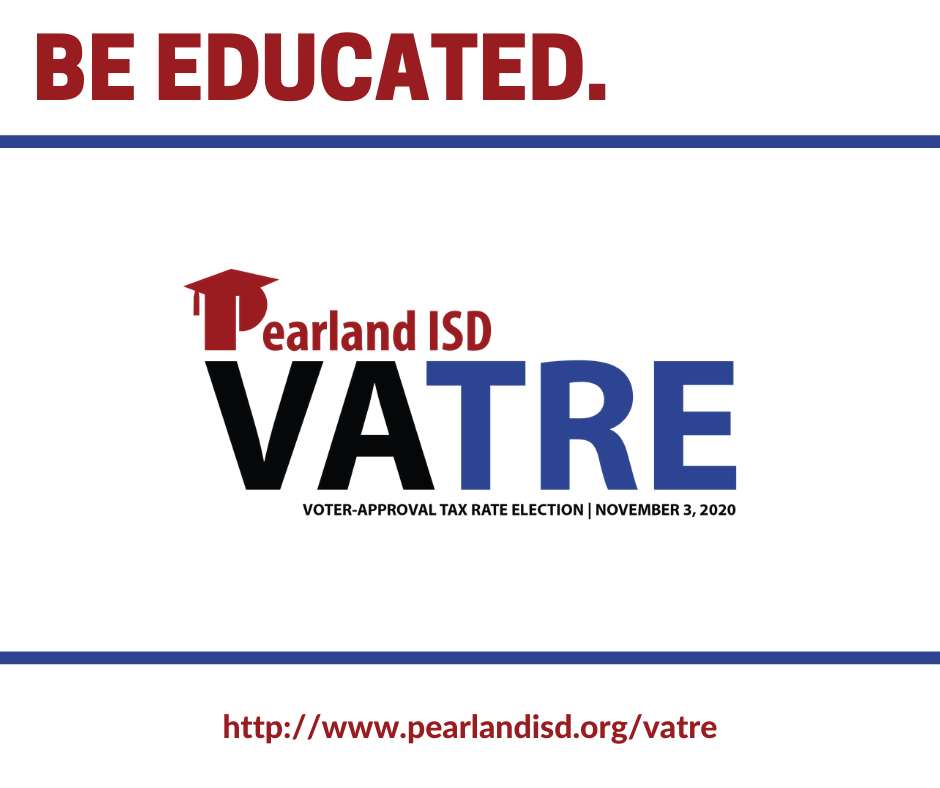 What is a Voter-Approval Tax Rate Election? Voters must approve any proposed school board increase in the tax rate when that tax rate is above the minimum established by the legislature. Such an election is called a Voter-Approval Tax Rate Election or "VATRE".For tax year 2020, the legislature compressed the district's tax rate by a total of 7.71 cents. Although the total tax rate adopted by the district is decreasing by 3.71 cents, a VATRE is required to capture 4 of the 7.71 cents in order to maximize state funding.Pearland ISD’s Maintenance and Operations (M&O) tax rate has remained the same or declined in each of the past 15 years. The district has never asked for an increase to the maintenance and operations tax rate.How much will the tax rate increase?Passage of the VATRE will result in a nearly $10 million funding increase for the District. This proposed increase to the tax rate will require voter approval, but still decrease the overall school tax rate by 3.71 cents, because of state mandated tax compression.Why call a VATRE?There are several primary reasons Pearland ISD has called for a VATRE:*1:1 Device Initiative*Enhance Learning Programs*Competitive SalariesTax Impact If the VATRE is approved by voters in November, the total tax rate will still decrease by 3.71 cents. Homeowners of an average taxable home in Pearland, which is valued at $257,742, would see a decrease of $95.62 on their annual taxpayer bill. Approval of this tax rate also maximizes school district funding by nearly $10 million.Learn more about the VATRE by visiting:
www.pearlandisd.org/ vatre
Reply
* Reactions disabled on political threads.
What are your thoughts? Log in or sign up to comment Log in » Sign up »

Thank you so much for posting this. Knowledge before the election is a must. A concise explanation
Reply
* Reactions disabled on political threads.
Post a comment »